Manny Pacquiao vs. Ricky Hatton, billed as The Battle of East and West, was a boxing match for The Ring light welterweight championship. The bout was held between Manny Pacquiao of General Santos, Philippines and Ricky Hatton from Manchester, United Kingdom.

The fight was held on 2 May 2009 at the MGM Grand Las Vegas at Las Vegas, Nevada, United States. Hatton was knocked down by Pacquiao twice during the first round, and again in the second round to lose by KO in the 2nd round. Pacquiao's win makes him one of only two (the other being Oscar De La Hoya) to win six world titles in six different weight divisions at that time (he won his seventh world title in seventh weight division on 14 November 2009 against Miguel Cotto). As of now Manny "Pac-Man) Pacquiao is the first and only eight-division world champion, in which he has won ten world titles, as well as the first to win the lineal championship in four different weight classes. According to Forbes, he was the 2nd highest paid athlete in the world as of 2015. The first highest paid is Floyd "Money" Mayweather who beat Pac-man in a unanimous decision in May of this year.

Below is a digital painting that  I completed recently, exploring a slightly different technique and style than my previous pieces.  Using Photoshop cs6 and Kyle's custom brushes, which you can purchase here.  Kyle has a lot of great brush sets that mimic all kinds of traditional media. Check them out and thanks for stopping by, enjoy!!! and stay inspired :) 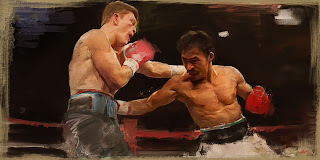