From wikipedia : Sir Christopher Frank Carandini Lee, (27 May 1922 – 7 June 2015) was an English actor, singer and author. With a career spanning nearly 70 years, Lee initially portrayed villains and became best known for his role as Count Dracula in a sequence of Hammer Horror films. His other film roles include Francisco Scaramanga in the James Bond film The Man with the Golden Gun (1974), Saruman in The Lord of the Rings film trilogy (2001–2003) and The Hobbit film trilogy (2012–2014), and Count Dooku in the final two films of the Star Wars prequel trilogy (2002 and 2005). Lee was knighted for services to drama and charity in 2009, received the BAFTA Fellowship in 2011 and received the BFI Fellowship in 2013. Lee considered his best performance to be that of Pakistan's founder Muhammad Ali Jinnah in the biopic Jinnah (1998), and his best film to be the British horror film The Wicker Man (1973). Always noted as an actor for his deep strong voice, Lee was also known for his singing ability, recording various opera and musical pieces between 1986 and 1998 and the symphonic metal album Charlemagne: By the Sword and the Cross in 2010 after having worked with several metal bands since 2005. The heavy metal follow-up titled Charlemagne: The Omens of Death was released on 27 May 2013. He was honoured with the "Spirit of Metal" award at the 2010 Metal Hammer Golden God awards ceremony. Lee died at the Chelsea and Westminster Hospital on 7 June 2015 at 8:30 am after being admitted for respiratory problems and heart failure, shortly after celebrating his 93rd birthday there. His wife delayed the public announcement until 11 June in order to break the news to their family. He will be missed and remembered for all of his amazing roles. Below is my homage to Lee in the form of a caricature of him as Saruman from LOTR and The Hobbit films. Thanks for stopping by, Enjoy !!!!

Here is a fun little practice painting that started out as a figure drawing session, then went into an entirely different direction. I love messing around with anatomy and discovering new forms. I call her Mrs. Groot :)  Thanks for stopping by, Enjoy !!!! 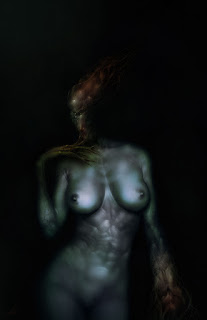 The Original, First and Only annual art book created for Halloween is now back and bigger then ever before ! Rodney Dollah's Little Book Of Monsters Vol. 2 is now available for order at this Link. Now hosting a cast of even more international artist from various types of the entertainment industries, all hailing from different parts of the world !!! and yours truly just happen to be one of the artist featured in Vol.2.   Below are 2 of the pieces that I contributed as seen in the pages of the book. There are lots of cool monsters in different styles to look at in this book, check it out at the link above. 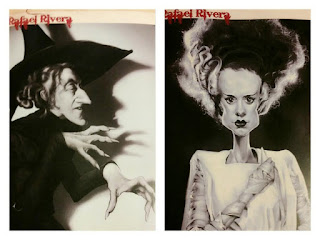