That time of year and the weekend of savings is upon us.  I for one am more of a cyber shopper.  Don't really like the crowds.  Here is a new painting I finished, I call Cyberotique. If you would like to order a print of this piece, it is available on my Inprint store Here.  Use coupon code SHIPFREE15 good until Sunday for free shipping on any of the prints including this one. It will also be available as a metal Print Here.   Use coupon code BLACK37 on this site for 37% off of any of the metal prints.  Happy Holiday seasons to all, and happy and safe shopping, and don't forget to spread some LOVE.  Thanks for stopping by, Enjoy !!!! 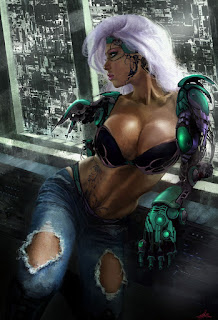 Happy Thanksgiving Everyone. Below is a caricature of Actor Michael B. Jordan in his role in The Rocky franchise spin off, "Creed", out today in theaters. The former World Heavyweight Champion Rocky Balboa serves as a trainer and mentor to Adonis Johnson, the son of his late friend and former rival Apollo Creed. I look forward to checking out the film. For now here is piece I did for fun. Thanks for stopping by, Enjoy!!! 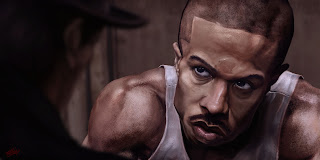 Here is a painting I have been working on, on and off  throughout the year.  A boxer sneaking in a counter punch from an unorthodox angle can cause a variety of damage :) I am a huge boxing fan and I even had a successful amateur career as a young man, so as an artist it's a great subject matter for me to return to, and one I know all too well.  This one was finished right on time for the release of Creed starring Sylvester Stallone  and Michael B. Jordan.  I can't wait to see the film, being such a huge Rocky fan.  Some of the Photoshop brushes used here were purchased on artist Aaron Blaise's website.  I have several of his brush sets, these were his canvas textured brush set which can be purchased here.  There are several great tutorials and texture sets available there as well.
Thanks for stopping by, Enjoy!!!! 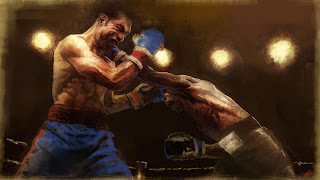 Danny Trejo, born May 16, 1944 is an American actor who has appeared in numerous Hollywood films, often as hypermasculine characters, villains and anti-heroes. His films include Heat (1995), Con Air (1997), and Desperado (1995), the latter with frequent collaborator Robert Rodriguez. Trejo is perhaps most recognized as the character Machete, originally developed by Rodriguez for the Spy Kids series of movies and later expanded into Trejo's own series of films aimed at a more adult audience. He also appeared in TV shows such as Breaking Bad and Sons of Anarchy.
Below is my caricature of Trejo, in a more serious style than a previous version, which can be viewed here.  The Photoshop brushes I used were purchased on the GrutBrush website.  I bought the Multiset from them.  they are wonderful , check them out and learn more about them Here. Thanks for stopping by, Enjoy !!!! 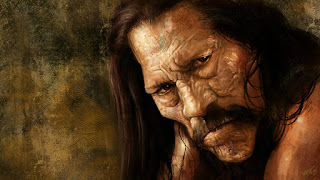 Mini-comic book I worked on with my friend and long time collaborator Ralph Suarez, is now available for free as a digital download.  This was a lot of fun to wok on, follow the link below to read Ralph's blog post and get your free download.  It is also available in printed form for only a few bucks.

Warm Milk Productions Inc.: "Purgatory Comics" Comic Book Now Available for FR...: It was a long journey that started way back in June 2014 , but we're finally there: the Purgatory Comics "sequel" comic bo... 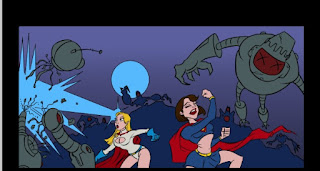 A combination Painting and Photobashing to honor all those who serve in our Military Past and Present.  Thank you, May GOD BLESS you and keep you safe. Thanks for stopping by, Enjoy!!!! 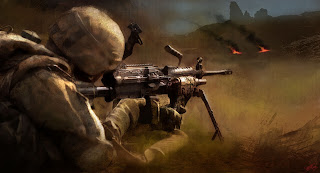